Work on design of the +2 seems have started in late 1962, led by Ron Hickman, who had designed the two seat Elan. For some time Colin Chapman and Hickman had been looking at various concepts involving a stretched version of the Elan, including an all purpose design with a two plus two configuration, to be offered in either removable hard top, estate or fixed roof styles. By December 1962 the Lotus Board gave the project its blessing.

The strength and rigidity of the Elan's backbone chassis had been proven to be more than adequate for a larger car, so the design took shape around a lengthen version, giving the extra space for two back seats. One key decision made by Chapman, Kirwan-Taylor and Hickman from the start was to base the car around the windscreen and surround of the Ford Capri Classic. A model was prepared, using the remains of a crashed Capri and the angle of the windscreen was set, laid back a subtle 4.5 degrees more than on the Ford original.

Chapman initially saw the car as having "the front of the Elan and the rear of the Elite", whilst Hickman's first sketches  (left) are reminiscent of the E Type Jaguar.
However,  the eventual shape emerged early on, with a  sketch in January 1963 (below right) showing pretty much the shape of things to come, but with a rounded rear quarterlight window. The sketches show that the front of the car was causing the most head scratching.

Twin fixed headlight and retractable units in the wings, as on the original Elan were considered, whilst a solution that would give the the car "proper" bumpers was also being looked for. Whilst touring the Motor Show Chapman had found the Elan's glass fibre bumpers "too dull looking" and it had been resolved to have proper brightwork bumpers on the next car.
A 3/8th scale model was made Hickman in April and May of 1963, shows the car with glassfibre bumpers and a single piece side window which has a very squared rear. A second treatment was produced showing a rear quarterlight and representing stretch - formed aluminum bumpers.
In the following months the design was lengthened and the Hickman came up with the tilted-cylinder design for the side windows which immediately tidied up the rear of the cabin and eliminated the need for rear quarterlights.
Work on the project  took second place to other projectsand preparations for the transfer of the Lotus factory from Cheshunt to Hethel in Norfolk. Nevertheless, work re-started in January 1964. By year end 11 engine options had been considered before settling on the Lotus Twin-cam and wind tunnel testing on a scale model had been completed at MIRA. With a Cd of .3 the M20 was remarkable for the time.

A rather ugly first M20 mule, christened "the Tub" was up and 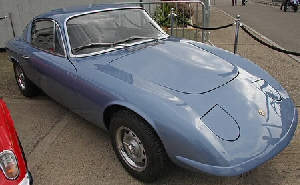 running by September 1965 and by late December construction of
the prototype known as the Metier II was well under way.
The first running Metier II was shown to the Lotus board in December 1965 at Alexandra Palace. Ironically, having got the car this far, doubts were emerging about the whole look of the car. Chapman had already seen that the next direction to take would be hard lined angular shapes, which he had already seen emerging, including those from Giugiaro who would design the Lotus Esprit for Lotus. It was beginning to look as if the delays might leave Lotus with a car with out of date engine and styling.
Yet despite the concerns, generally the car was well received, but considered too narrow for its length. The rear 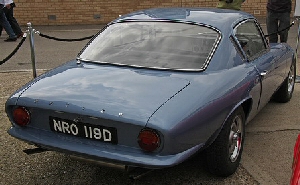 quarterlight window had gone, but Chapman disliked the narrow front end of the car and wanted something wider, with the look of the "Rover-BRM Le Mans Project Car". The need for a production front bumper, in this case from the Ford Anglia, forced the decision to widen the car anyway. It took several re-designs before Chapman was finally happy with the width of the car, adding around 7 inches to the prototype's track.

The car was now 10 inches wider and 23 inches longer than the original Elan and 3cwt (152kg) had been added to the weight. The potential performance of the car was not in doubt however, as the Metier prototype was now to be found circulating the Harlow Industrial Estate in the early hours of the morning, at speeds of up to 125mph. 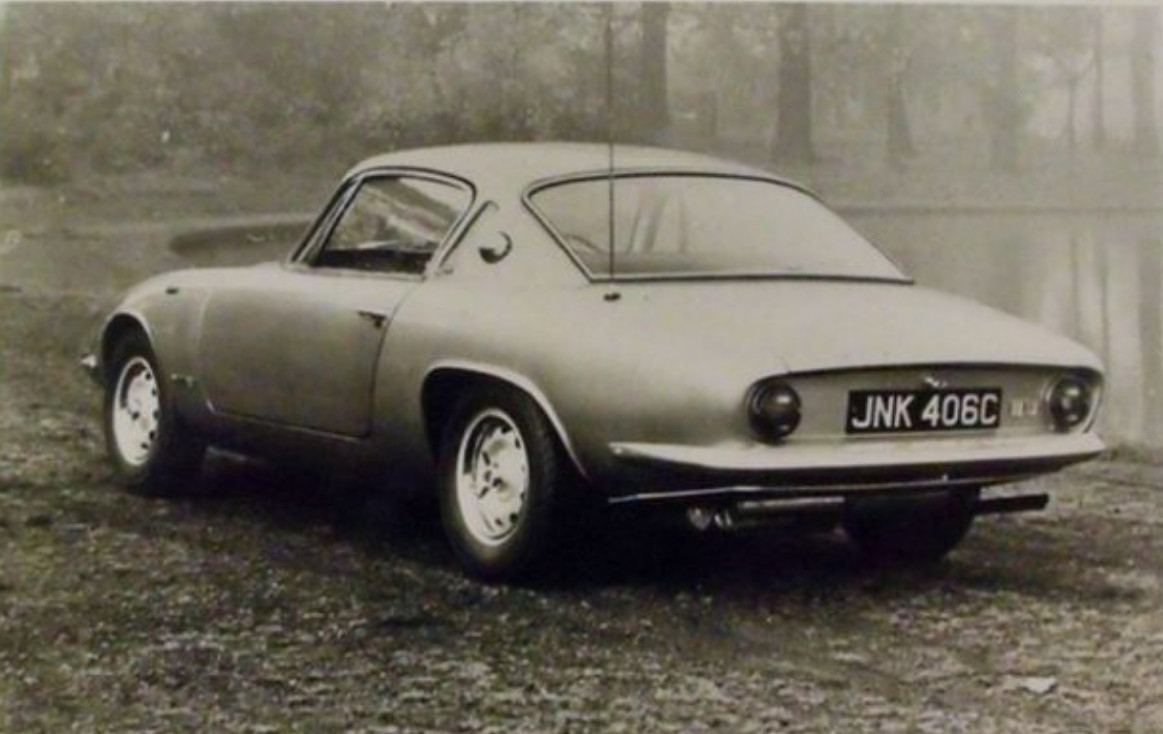 The Metier II, during its unveiling to Colin Chapman and the Lotus product policy committee in November 1965.

The estate car and removable roof were not entirely forgotten, with the concept making it as far as the clay model stage. but in January 1966 the Lotus Board killed the 3 in 1 concept once and for all. The open car never materialised either, although aftermarket conversion to remove the roof was offered by firms such as Hexagon of Highgate and Christopher Neil.

Attention in early 1966 was now focused on the detailed redesign of the Metier II to accommodate the wider bumper and to attend to details like the Lucas sidelamp and indicator unit. At this stages the box sections in the sills were added in anticipation of the soon to be introduced toughening of  US type acceptance laws.

By this time Chapman and Hickman were clearly not seeing eye to eye, with Chapman telling the design and production policy teams in no uncertain terms that the car would be "the biggest white elephant in the motor industry". Hickman decided not to follow Lotus when the move to Hethel came in November 1966, although he stayed on for at least three months to help the Lotus Developments staff to settle in. At some point around this time the horrible discovery was made that the tooling for the Capri windscreen and surround had been destroyed literally the week before. As Hickman commented, " The glass we could afford to tool up for again, but as regards the metal surrounds there was no question at all. So we had succeeded in designing a whole new car around a very expensive-to-tool component which we could no longer get. I could only laugh bitterly and say 'It's over to you chaps now."
The interior was designed by a team controlled by Brian Luff, although to Hickman's satisfaction when he saw the results.

Lotus was now ready to go into production of the Elan +2, with a car that had been more thoroughly productionised than any of its predecessors. Indeed the car was £95 cheaper to produce than the fixed head two seat Elan. Lotus was preparing to go to the market to raise money for developing its next generation of cars and inevitably the accountants pushed for cheaper production methods and the buying-in of as many parts as possible from the volume manufacturers.

The company now prepared for launch of the Elan +2