There was a time when the +2 was a cheap second hand sports car and owners were willing to part with good cars willingly. From the owner's point of view a tired Elan was not much fun and if the car started to get a bit tatty, then it hardly fitted the bill as an image car. For many the prospect of chassis change at some point in the near future was a big incentive to sell. Sadly, a fair number of +2S were bought just to rip out the Twin cam for transplant into another car or as a donor of parts for a kit car. The classic car boom never really lifted +2 prices in the way that it did most other Lotuses, so they did appeal to those with less cash who still wanted something sporty. I saw a lot of these cars when I was hunting for mine and many were on their last legs, having been thrashed by boy racers who couldn't really afford to keep them on the road. There were some good cars still and a few good fully restored versions, but even so it was a long slog to eventually find a decent one at the right price.

A lot of the tatty cars have gone for ever, although there do seem to be a lot of stalled restoration projects out there. Frankly, I would never touch a disassembled car, as you can't easily tell if you have all the bits. Even with the tired, but running, cars you will probably spend more on the restoration than the car will be ultimately worth if it is ever going to really look the part.

Unless you are confident of being able to put the time and effort into rebuilding the car yourself, I think the only answer is to find a completely restored car, in full working order. Unfortunately you will have to pay the correspondingly higher price such a car commands, assuming you can get anyone to part with their +2 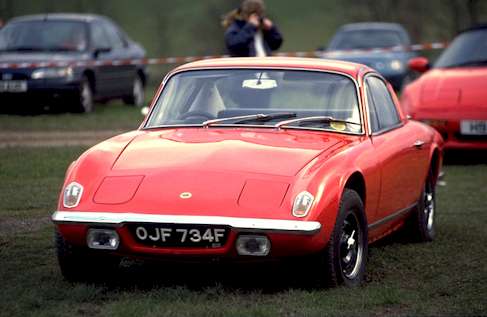 Elan +2s do pop up in the Classic car magazines and of course its well worth joining Club Lotus to see the cars advertised in their newsletter. Expect to pay a fair bit more for the +2S 130/4 and 130/5 models. Early models are noticeably cheaper than the +2S, except where in very good condition. Sensible modifications such a sunroof or a new stereo don't seem to hinder sales, neither does the use of a Spyder chassis instead of a Lotus original.
One final word of warning, get the car thoroughly inspected, if there is damage to the chassis or other significant remedial work, you would be better off walking away and finding another car.