This could end up as the single largest page on the entire internet!

There are some trouble free Elans, but ...

Lotus always had a reputation for producing fragile cars and despite numerous claims from the factory at the time the +2 was no exception. Of course the oldest +2s are over thirty years old now and many have passed through numerous hands. Some of those owners will have bought a cheap third hand sportscar and bodged and neglected in equal measure. In reality they are pretty reliable, but they do need more looking after, especially as any original components have been on the road a long time. Even the fully restored Elans can let you down, so the rules of Elan ownership are

Here's some things that went wrong on just one car: 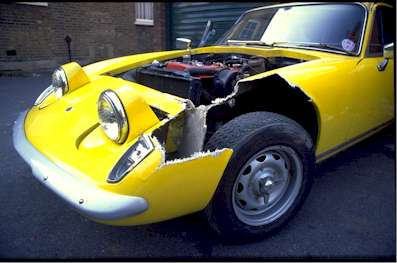 For more on the subject of car fires, there's a page of thoughts on what you should do.